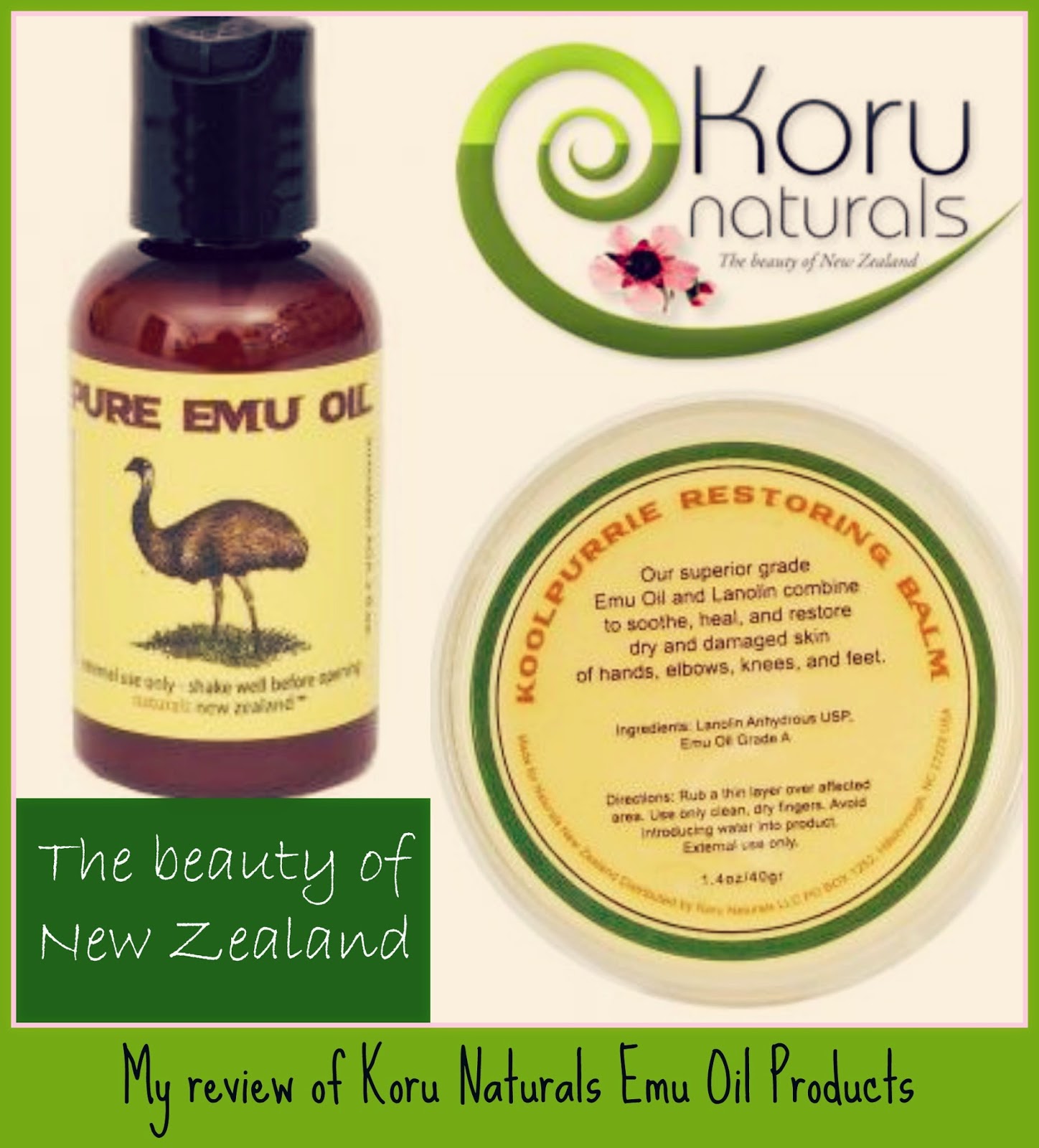 Western New York winters can be brutal on skin and hair, and this past few months have certainly been no exception. This has been one of the coldest, harshest winters that Western New York has experienced not only during my lifetime, but also during the past century!

I am always looking for the most effective moisturizers for hair and skin, especially during winter. With a house full of girls, we have quite the eclectic collection of lotions, hair products, and creams. When I was blessed with the opportunity to review Emu Oil and Koolpurrie Restoring Balm from Koru Naturals, I was excited to see if these products could stand up to a Buffalo winter and be more effective than our current favorites.

About Koru Naturals: This company uses natural substances from New Zealand to make available  an entire line of personal care products such as shampoo, skin care, lip balms, honeys, teas, and specific products for men, women, and even infants. All of their products originate in Australia and New Zealand, and are developed carefully using natural substances, not chemicals. None of their products are tested on animals. Based in North Carolina, the company has been in business since 2002.

Pure Emu Oil: We received a single bottle of pure premium grade Emu Oil from Koru Naturals. The bottle contains 100% pure oil with no additives. It is almost clear and nearly scentless. It claims to be hypo-allergenic, easily absorbed, and non-clogging to pores. According to the directions, we were to only use 2-3 drops at a time, as it is so highly effective that anything more than that would leave a greasy feeling. It is for topical use only.

How we used the Emu Oil: I used this small bottle every way I could think of, on a daily basis, and I still have nearly a full bottle because so little is needed with every application. I have been applying it to my hair after washing to help combat the frizz and dryness of the harsh, cold temperatures we have been experiencing. Just a few drops rubbed into damp hair left my hair amazingly soft and virtually frizz-free. I was able to use it multiple times a week as well, with no ill effects.  I also used the emu oil on my face. I have oily skin already, so I was concerned that rubbing more oil onto my face would be uncomfortable at best. It definitely left my skin feeling soft, and it did not feel greasy at all. The key is to follow the directions and just use a few drops.

The other way I have used the emu oil is rubbing onto dry areas of my skin, specifically my hands and feet. I found this worked most effectively directly following a shower. Usually by this point of winter, my feet are dry and my heels are cracked. The emu oil treatments have left them as soft as can be though.

One thing that I appreciate about the emu oil is that I can apply it multiple times throughout the day, and it absorbs so quickly into my skin that I don't have oily residue to deal with. Although the emu oil makes no claims to minimize scars, I was curious if it would help a deep scar that I have, and tried applying it daily. Though I didn't notice a big difference in the scar's appearance, it certainly made the skin of that area much softer!

Koolpurrie Restoring Balm: This small, round container combines the pure emu oil with pure lanolin in an all natural balm that can be rubbed onto dry skin, especially body parts such as hands and feet that are exposed to extreme conditions. Like the emu oil, it can be used multiple times throughout the day and only the tiniest amount is needed to be effective.  It contains omega 3 and omega 6 fatty acids, but does not contain any preservatives, additives, chemicals, dyes, or perfumes. The balm claims to be safe for people with eczema and other skin ailments, and I was excited to test that out, because my daughter always has problems with lotions and gets terrible eczema on her hands during the winter. Nearly every cream we have tried makes her hands turn fiery red, bleed, and itch, actually making the problem worse.

How we used the Koolpurrie Restoring Balm: The very first thing I did was rub a small amount onto my daughter's hands, hoping that it would not cause any serious reactions for her, and that it could ease some of the pain she was experiencing from the dry skin on her hands. I was so pleased that she had no immediate reactions, and her hands did not hurt or itch afterwards. The balm has no scent, so she didn't mind rubbing it on to the back of her hands. She has done it twice a day since we received the balm. Her hands are nearly perfect! No eczema. This is truly a miracle for her - the first winter she has been able to have pain-free, soft hands. When we first received the balm, her hands were red and chapped. Within two days of regular use, they were completely healed. I have included "before and after" pictures here to show what a difference it made for her.

Next we tried the balm on dad. He doesn't like any scented creams, so finding something effective for him can be challenging. He has terrible cracked fingertips from working out in the cold. We applied the balm to his fingertips before he went to bed at night, and by morning they were greatly improved. We knew the Koolpurrie Restoring Balm was a winner when he came home and asked for it himself, and didn't have to prompted to use it. In his words, "That emu balm stuff you got really works!"

Final Thoughts: My favorite use for the Emu Oil definitely was applying it to my hair after washing. I am enjoying my soft hair that is absent of the typical winter frizz. I enjoyed using the Koolpurrie Restoring Balm on hands and feet. It has a smooth consistency and is easily absorbed into dry skin. We have been so impressed with its effectiveness, and I am so happy to have a way to care for my daughter's hands without causing her more problems.

The Old Schoolhouse Review Crew tested out several different products from the Koru Naturals Company, including Lanolin lip balms, lanolin creams, and manuka oil and honey shampoo and conditioners. To read their reviews about the other products, click the banner below: