We were introduced to the wonderful audio theater CD's produced by Heirloom Audio Productions last year when we reviewed Under Drake's Flag. When we learned that Heirloom Audio Productions was working on a new CD called In Freedom's Cause, we eagerly anticipated it and were thrilled to be asked to review it. For this review, we received the In Freedom's Cause Single Package,  which includes the CD set, a digitally downloadable study guide, a sound track mp3 file, and a printable copy of the prayer of William Wallace.

What is the story of "In Freedom's Cause?" This audio theater CD is based on the popular book of the same title, written by the notable G.A. Henty. The story begins around the end of the thirteenth century, when Scotland was struggling for independence from English rule, and brings to life the inspiring leadership and courage of William Wallace, a "guardian of Scotland". In this story, several highlights of Wallace's life, battles, and triumphs are examined in a historical setting, through the tales of an aged storyteller to two young boys. Through Wallace's passion and training, young men in Scotland were inspired to courageously stand for freedom and Scotland's honor. While many thought Wallace's strongest weapon was his Claymore, we find in this story that it is actually the time spent with his Psalter that constitutes his source of strength. Though Wallace died before seeing the end result of his efforts for Scotland's freedom, his life was not in vain. His work laid the foundation for Robert the Bruce to step in and finish what Wallace began.

More than just an audio book: Audio theater brings the story to life. There is a diverse cast with authentic Scottish actors. The voices are charming and very real to life. Vibrant sound effects in the background grip listeners and draw them into the story in a remarkable way. We enjoyed watching the Behind the Scenes Video of the making of the story.

On a more personal note: Several years ago, two of us had the privilege to visit the lovely land of Scotland on a missions trip. We fell in love with the people, culture, and the history of this nation. Listening to "In Freedom's Cause" brought back so many memories of the friends we made and the sights we saw.  As Americans, hearing the longing for freedom in this story made us think of our own early American history, and the struggles the Patriots had several centuries later in their fight against English tyranny. We definitely could relate to the zeal and emotions of the Scots.

More about the CD: The entire story takes about 2 1/2 hours to hear from beginning to end. It comes in a 2 CD set. It is recommended for ages 6 to adult.

Additional Study Helps: The study guide that accompanies this CD package is very effective at helping students listen carefully to the story and dig deeper into the details of the history, culture, and characters' lives. For each track, there are three assignments: a list of new vocabulary words to define, listening comprehension questions, and "further thinking" questions which challenge the listener's reasoning skills by asking abstract questions related to the story. At the end of the study guide, there are three Bible studies outlining common themes found in this story: fearing no evil, vengeance and forgiveness, and true freedom.

How we are using this: This CD has been played countless times since we received it. It is a timeless classic that is both entertaining and educational. While the characters and story line are genuine and exciting, the realistic sound effects draw the listener in as if they are present at the hearth or battlefield, drawing a vivid picture of the story in the mind. At first, we listened for the sake of the entertaining story. After several times of listening, the children began asking questions about various points that were made regarding Scotland's history, and the Middle Ages in general. Investigating the answers to these questions developed several excellent study opportunities for our family. After listening several times to the CD, we discussed the questions found in the study guide. Answering the comprehension questions was pretty easy, as the CD makes the history so vivid that the girls remembered the most minute details. The abstract questions, delving in to areas of how we interpreted that history and what the characters might be thinking about, were a little more challenging, but also made for some very productive and enlightening conversations.

Our Two Favorite Quotes: While there were so many heart-inspiring statements declared in this story, we definitely identified two that we found truly stirring - in fact, we posted them on the front of the fridge for everyone to see on a daily basis!


"The true battle is not in the field, but in your heart" - William Wallace

"We can train for skill, but fire comes from the heart" - William Wallace

Our final opinion: We absolutely loved this CD! It appealed to all family members, regardless of age or personal interests. While it discussed some violent topics, we feel it presented them in a cautious and tasteful way as to not bring fear to the younger children in our family. We are planning on purchasing several CD's for gifts, as we know several people that would just LOVE listening to them as much as we have. 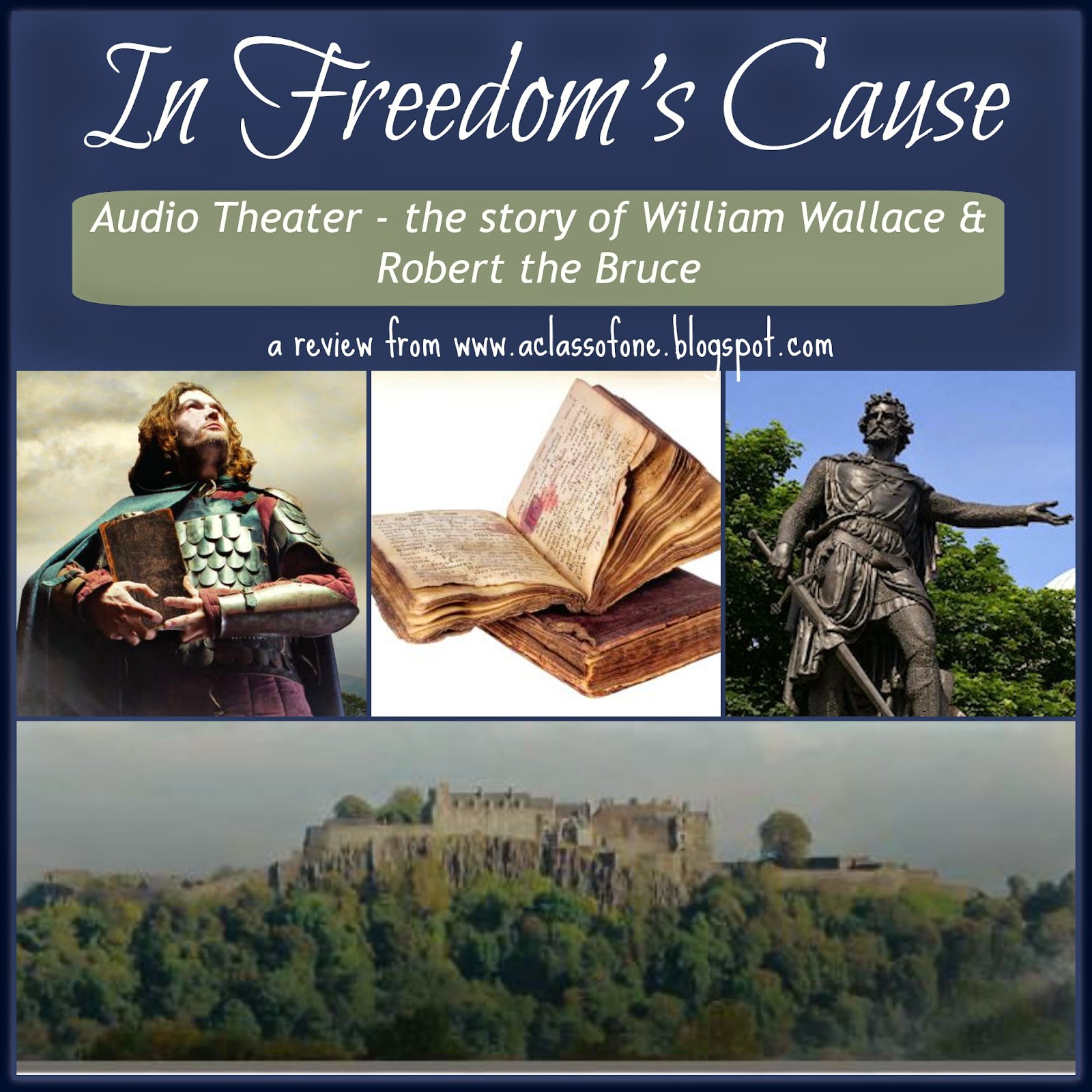 We are already looking forward to the next CD production coming from Heirloom Audio. It is an audio theater production of Henty's book With Lee In Virginia and is scheduled to be released in May, 2015.


If you would like to read what other members of The Old Schoolhouse Review Crew thought, please click the banner below: