As part of our September study of Colonial America, we made Johnnycakes and homemade butter, just like Felicity's family might have done in the 1700's.

Johnnycakes were a popular staple in the colonies. Corn was abundant, and the bread is made up primarily of ground corn. It kept well and was good for travel, especially when made in smaller round portions. It was also very inexpensive to make, and was simple fare made from ingredients on hand. The name Johnnycake actually was an adaptation of their original name - journey cakes, so called because of their popularity when traveling.

Because of the simple ingredients, we were able to adapt it to be gluten free, so at least most of the family could sample it!

We decided to make one large bread, and we also cooked it in the cast iron skillet on the stove top, much the same way that a colonial lady might have done. 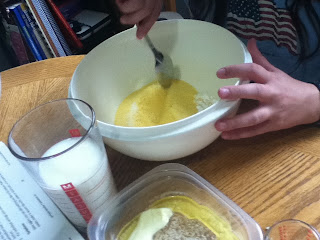 Mixing up the Johnnycake batter.
﻿ 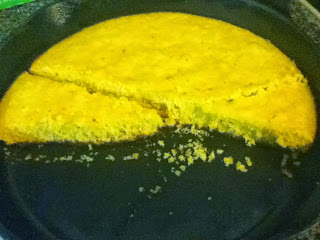 It was very different to cook in a cast iron skillet on the stove top!
Let me suggest that if you decide to cook the johnnycake this way, watch it closely! It is very easy to scorch the bottom if you are not used to cooking it this way.
Johnnycake Recipe
1 cup fine ground corn meal
3 Tbs. honey
½ teaspoon salt
1 tsp. baking powder
1 c. flour
1 egg
2 Tbs. softened butter


Mix ingredients together until just combined, then slowly add liquid (amount listed below) until the desired consistency is reached. Batter should be thick and somewhat lumpy, but able to slowly slide off a spoon.
Add up to 1 1/2 cups warm milk or boiling water. Don't overmix.
Scoop batter into a well oiled skillet, cover, and cook over medium heat for about 20-25 minutes. Check often to make sure the bottom is not overcooking or burning. These can also be made in individual sized cakes, using a hot griddle.


Making Homemade Butter
We had a lot of fun making homemade butter, and we were very surprised at how delicious and creamy it was!
Since we don't own an old fashioned butter churn, we 'kind of' cheated and used a quite modern canning jar to shake our heavy cream. After pouring a half-pint of heavy cream into the jar, and fastening the lid down tight, we all took turns shaking until our arms ached. It took about 20-25 minutes to see the cream finally separate and to see some solid butter start to appear. A little extra shaking got just about all the liquid separated, which we poured out and used in the johnnycake recipe! Oh, and I did add a few shakes of salt to the cream before we started shaking, just to give our butter a little more of the salty taste that we are used to. It worked out very well!
This ended up being a very simple project that really made a big impact on the girls, and brought a lot of enthusiasm to our studies. They could not stop talking about how it must have been for the colonial children to make butter every week, since the children were the ones who typically were called on to do the churning.
Best part....we got to spread fresh, creamy butter on our warm johnnycake! Delicious!
﻿ 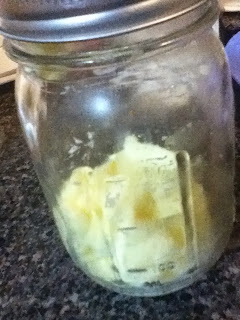 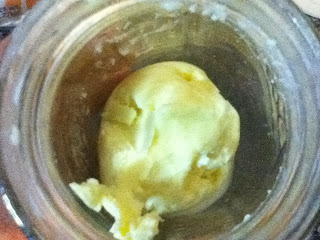 Here's what the lump of butter looked like after about 25 minutes of shaking the jar, then draining the separated liquid off.

Copyright 2012-2013 - "Be The One" - www.aclassofone.blogspot.com  All rights are reserved. No text, photos, or content may be reproduced without direct permission from the author.
Posted by Unknown at 10:48 PM