While "Blogging Through The Alphabet" is all finished, and I was able to blog 26 different characters for each week, I found that I had a few favorites that didn't make it into my weekly posts, so I wanted to include them here at the end. In no particular order, I will be posting a few more obscure Bible Heroes over the next few weeks. 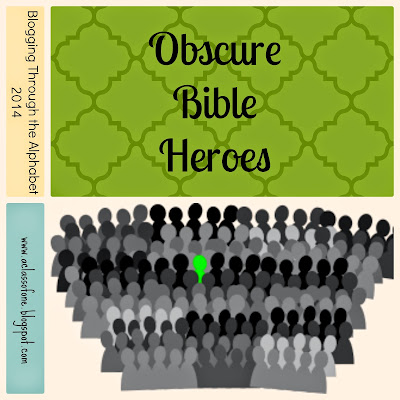 Judges 3:31: "And after him was Shamgar the son of Anath, which slew of the Philistines six hundred men with an ox goad: and he also delivered Israel."

During this early period of Israel's history, they were the only nation in the world that lived under a theocracy - direct rule by God. While God gave them earthly leaders to follow, they did not have a king ruling over them. The Israelites went through cycles of disobeying and forsaking the Lord, then being brought under the oppression of neighboring nations.  These dark times would cause them to humble themselves, get right with the Lord, and then God would send a deliverer to help them throw off the shackles of oppression and become independent once again, living in their own land in peace. It amazes me how often the cycle was repeated. Most of this history is recorded in the book of Judges.

Judges 2:16: "Nevertheless the LORD raised up judges, which delivered them out of the hand of those that spoiled them."

The book of Judges is full of obscure and unlikely heroes. Most of the men (and women) listed there are people who had hardships and circumstances in their lives that would seemingly disqualify them for leadership roles, yet those are the people God chose to deliver and save His people. It is fascinating to read their stories.

There is one who has always stood out to me as a really great example of a man who used what he had to accomplish great things.  As a judge chosen by God to deliver Israel, he had a high calling. Yet he seemed ill-prepared. If you consider this verse, it mentions that he used an ox goad to kill all the enemies.

An ox goad is a long, pointed stick that was used to goad, or push along, oxen that were plowing. It is not exactly the weapon of choice when one needs to face a well-equipped army such as the Philistines. That is precisely what makes Shamgar a hero though. He didn't have all the right tools, but he had a heart of obedience to God, and took what was in his hand and used it to finish the job God gave him.

Perhaps Shamgar was a farmer who was used to wielding an ox goad on a daily basis with his cattle. Perhaps God took him from his task of plowing the fields, and sent him out to battle the Philistines. While we do not know the details of his life, we do know that he was greatly used, against great odds, to battle and overcome 600 well-trained, battle hardened Philistines, and free Israel from their bondage. Following his heroic deeds, Israel lived in peace for many years.

Like Shamgar, I want to be busy serving the Lord with what is in my hand. I don't need to wait for God to give me more, or equip me better, but I need to just realize that God has already equipped me for the job He has called me to. Now it is my duty and privilege to get busy doing it, accomplishing great victories for God with what I already have in my hands.

Copyright 2012-2014 - "Be The One" - www.aclassofone.blogspot.com  All rights are reserved. No text, photos, or content may be reproduced without direct permission from the author.
Posted by Unknown at 7:21 AM