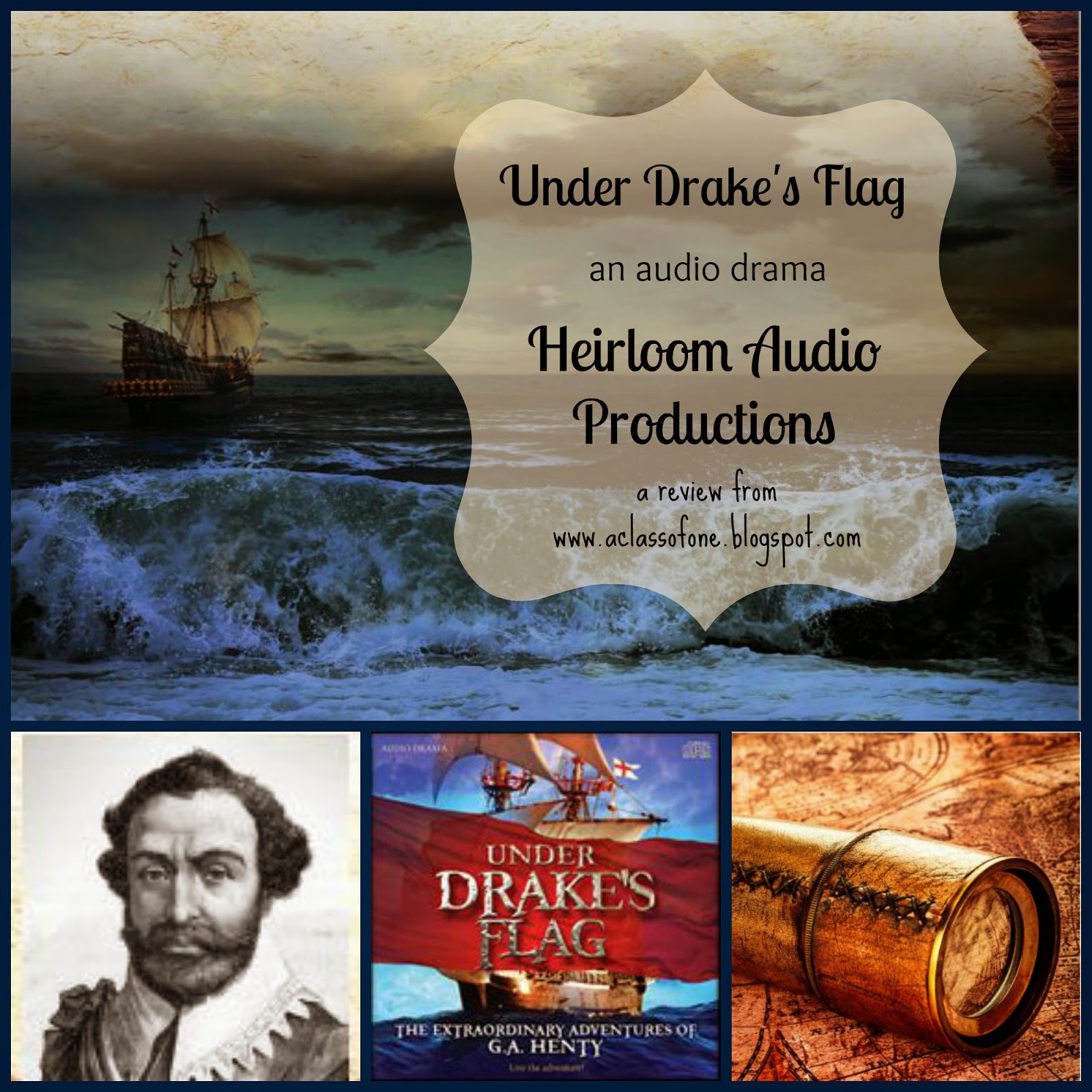 Our family really enjoys Audio Dramas. I think they are a super alternative to TV viewing. The kids listen to them constantly when they are working on projects or doing household tasks. We usually have one playing in the car when driving. When I had the opportunity to review Under Drake's Flag from Heirloom Audio Productions I was very excited, because the reputation of G.A. Henty and his work is renowned, and it sounded like a great new adventure that would appeal to our family.

About the story: "Under Drake's Flag" is an historical fiction work by George Alfred, a Christian man who lived from 1832-1902, and authored 122 books. It is a tale of heroic deeds and adventures on the high seas, and follows the 'coming of age' journey of two young men who served under the famous Sir Francis Drake. The story highlights Ned, a young fatherless boy, and his friend Gerald, as they grow up in Britain in the 1500's. Ned's father died at sea, and his mother is terribly worried that her boy will suffer the same fate. She has devoted her life to instilling character in him, and the time comes when he must take that giant step into manhood. He proves his honor and character time and time again, by saving lives and living with integrity despite many trials. He learns that even in times of fear, his faith must carry him. Ned and Gerald are privileged to be chosen to serve on a ship under the great Captain Drake, where their faith is strengthened by the example of this Godly man. They learn the definition of true courage and heroism.

About these CD's: The story is told by a wonderful cast with authentic accents who make the story come to life. These CD's are much more than just a story being read - this is truly audio theater, complete with sound effects and musical background.  It takes about two hours to listen to the entire story on two CD's.

What else is included? There is a short study guide with vocabulary words and questions included in the CD case.  When purchased from the website, there is also a longer study guide included that could turn this into a very prolific unit study.

About the enhanced study guide: The 28 page long study guide breaks the story down into chapters. Each chapter includes three sections: 1) 'Listening Well' has comprehension questions, 2) 'Thinking Further' has thought provoking questions that help the student apply the principles to their life, and 3) 'Defining Words' has vocabulary words from that particular section of the story for the student to look up and define. At the end of the study guide there is a very nice "Bible Studies" section that includes principles taught in the story, with corresponding verses for the student to look up and study.

Who would this appeal to?  The company recommends the story for ages 6 to adult. I think some 6-8 year olds may have difficulty following some of the story line. It is rather fast paced. My 9 year old was able to follow most of it. I think the story would be especially appealing to boys. I have all daughters, and while they enjoyed it, it wasn't something they would listen to repeatedly like they do with some of their other audio dramas. If I had boys, I would use both the CD's and the study guides extensively with them, to instill the Christian manhood and character lessons that are prevalent throughout the story.

How we used it: We listened to the audio story while driving in the car. It was interesting enough that the kids brought it into the house when we arrived home in order to finish the story. They enjoyed the British accents! I looked over the study guide and used some of the thought provoking questions to instigate some discussion about the lessons taught through the story.

What we thought: The kids were intrigued by the story, and gained a much richer understanding of the difficult lifestyle of that time period. (1500's). Our discussions led down several different paths, including the very poignant fact that if Britain and Sir Francis Drake had not defeated the Spanish Armada in 1588, the history of our own country would be vastly different! While these thoughts and ideas are not directly taught or discussed in this particular story, we would have never taken the opportunity to discuss them if it were not for listening to this story. I was particularly pleased with the continual references to Godly character and faith building that happened throughout the story. The entire story line is built around opportunities for the listener to learn how to make responsible choices and build integrity in their own life.

How much does it cost? The electronic download is currently available to purchase on the website for $20. This includes the e-study guide and a copy of Drake's prayer. The 2 CD set that we reviewed is also available for $29.95.  There are several packages and bonuses that the company has put together that would certainly enhance your study.

Ninety-nine other members of The Old Schoolhouse Review Crew reviewed this same audio drama! Read their reviews by clicking the banner below: