Obscure Bible Heroes {Blogging Through The Alphabet - A}

It's time for a new "Blogging Through the Alphabet" series, and this time I decided to choose a theme and stick to it for the duration of the alphabet. I have chosen to write about obscure Bible heroes - the humble, unsung people who lived their daily lives and were used by God in a great way. They may only be mentioned in passing in the Bible, but there are many things that can be learned from their lives. Perhaps they had one moment of greatness, or just simply were "where they were supposed to be" at the right time, but something that they did was relevant enough for God to include them by name recorded in His Word. That inspires me to see what I can learn from their lives.  I hope these writings will be an encouragement and blessing to you as you serve the Lord in the place He has set for you! 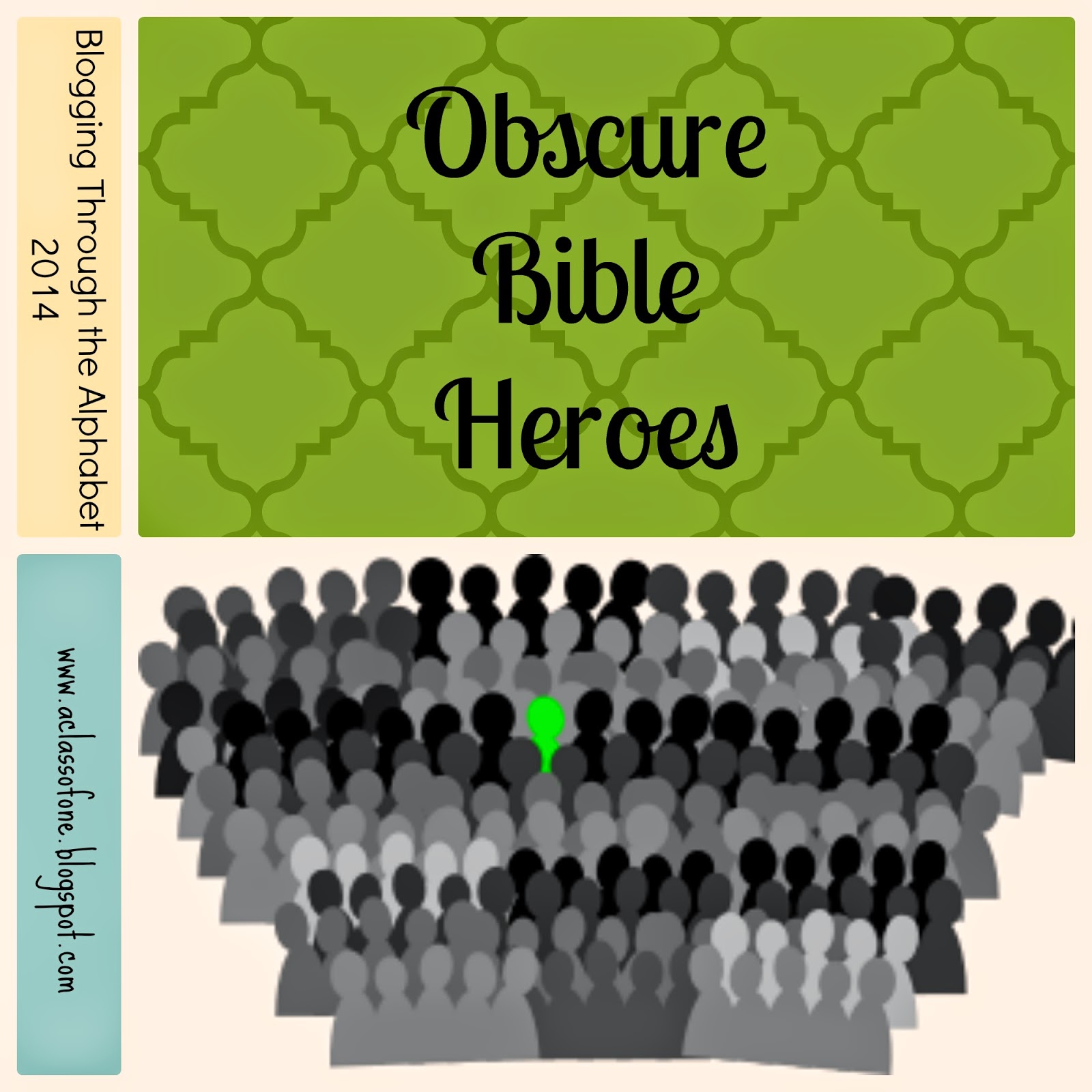 My first choice for an obscure Bible hero is Abigail. Her story can be found in 1 Samuel 25. The Bible says that Abigail was "a woman of good understanding, and of a beautiful countenance" (v. 3) and that she was married to Nabal, a man who "was churlish and evil in his doings".

The background to this story is that David and his mighty men were out in the wilderness, alongside the men who were taking care of Nabal's vast herds. While in the wilderness, Nabal's shepherds and David's men watched out for each other, and had a good relationship. In fact, David and his men served as unequivocal protection for the herds, and never asked for anything in return.

When David heard that Nabal, a very rich man, was having a sheep shearing, which typically meant fresh meat and feasting for the workers involved, David asked for some provisions for his men who had been working alongside the shepherds. Nabal obstinately refused to even acknowledge anything that David had done, and despised, or took lightly, the protection that had been afforded to all his wealth and possessions. He treated David's men roughly and sent them away empty handed.

David's response to this affront was to gather up all his men and set out to take revenge on Nabal and his men. He fully intended to shed blood, and given the nature of the mighty men, it would have been the end of Nabal and his household. The servants, who knew just how tough David's men were, when they heard of the plan went and told Abigail, their master's wife. They knew that selfish Nabal would not be moved by David's threats, and would not change his verdict. They also realized that feeding David's men would be a small but significant way of showing gratitude. Basically, they understood that their master was being completely unreasonable for refusing the request, and they did not want to suffer the consequences for his actions.

When Abigail was made aware of the situation, she quickly used her good sense to formulate a plan, gather and prepare the provisions, and quickly satisfy the request of David. She demonstrated great wisdom and a humble spirit. She did not rail on her husband, even though she understandably could have been very frustrated with his behavior. She cared for the servants enough to know that by her quick and kind actions, she would be saving their lives. They trusted her to know exactly what needed to be done, and this trust was well placed.

When Abigail came to meet David and hand deliver the food and provisions for his men, her humble demeanor greatly impressed David. Everyone involved in the situation knew exactly what type of man that Nabal was. Abigail did not feel the need to speak destructively of him, even though his behavior was deserving of it. She used her words to build up those around her, and speak kindly, repairing and restoring the relationship that had been broken.

Abigail's quick thinking and kind actions saved many lives that day. I think of her as a classy lady, not bitter or wallowing in self-pity, even though she was married to a harsh, uncaring man. She was full of the joy of the Lord, and allowed God to use her in a great way to bring help exactly when it was needed. Soon after her great deed, Nabal died. David never forgot Abigail's kind ways, and eventually she became his wife.

May we always be looking to make the right choices, and may our behavior always be filled with kindness and reflect the love of God to those around us, no matter what the circumstances are that we find ourselves in.


To read other Blogging Through the Alphabet posts, click the button below.