Since my childhood I have always had a deep interest in all things political. I have distinct memories of certain political events from growing up - everything from my marching band in school playing for a presidential candidate to voting in my first election at age 18. As I get older and busier, I try to stay informed on current political events as much as possible, and have tried to cultivate this same interest in my children. I firmly believe in the power and importance of being involved in our American political process to the best of our ability! When our family had the opportunity to review The Presidential Game through The Old Schoolhouse Review Crew I was excited because I suspected this game would not only be fun to play, but would really help the children understand the somewhat daunting electoral process of electing an American president! I was not disappointed!
The Presidential Game is a board game complete with 2 sets of dice (red and blue), red and blue chips to mark electoral votes, as well as "politics" cards (which include extra opportunities to gain/lose chips), and a scoring pad to keep track of votes. The board itself is an electoral map of the entire United States, with the current number of electoral votes those states hold.

Players join up to form two teams - the Republicans (red) and the Democrats (blue), and then begin the game. Each round of turns is equivalent to one 'week' on the campaign trail, and you can predetermine how long you would like your game to last by setting the number of 'weeks' or rounds that will be played. Chips mark the place of votes, and players put the number of chips they win on the states that they are fundraising or campaigning in. When they have reached the number of votes, or chips, needed to win that particular state, it is declared a red or blue state and the votes counted towards the 270 total votes needed to win the election. The instructions state that a full game is 30 weeks and should last about an hour. We found that it took us much longer - perhaps because the teams were slower in their decision making process of which states to campaign and fundraise in! Instructions are included to be able to complete a shorter version and still come up with a winner.
A bonus feature that comes with the game is access to an online interactive electoral map that looks just like the one shown on TV news networks during a presidential election. Instead of tallying votes by hand on the score pad, players can set up a tablet or laptop on the table while playing, and tally votes electronically in real time! As states are won by either party, the electronic map changes the color of the state to red or blue depending on which party won it, and also automatically tallies the votes at the top of the screen.  As you well know, the first party to reach 270 electoral votes wins the game and the election!
Here is a screen shot of one of our electoral maps from the online interactive WebMap Calculator: 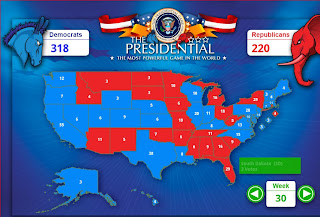 How we used this game: We divided our family up into teams, and used this game for "Family Game Night". It was a blast! We had so much fun with it. We decided that we really like the online WebMap Calculator to tally votes and keep track of what week of play we are on. The children enjoyed watching the states change color on the screen. There was also some 'stealing' of states going on, as the children got more savvy with their campaigning strategies. It was really amazing how close the races were - very similar to real life. The children enjoyed modeling their decision making after recent presidential elections that we have discussed. One team was strong on fundraising and trying to win the 'big' states, and the other team focused on campaigning and quickly picking up all the 'little' states. The races were very, very close, and often came down to just one state being the deciding factor, much like it has been in the past three presidential elections! 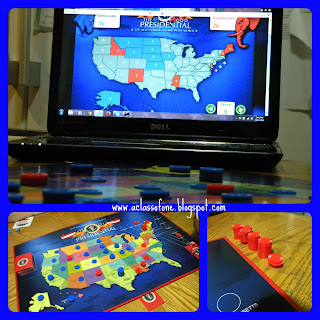 Lessons learned from this game: In the game, fundraising is only allowed in four key states: California, New York, Texas, and Florida. The children were really able to grasp the concept of why presidential candidates spend so much time in those states. There was much campaigning in states where more electoral votes were at stake, much like the real life process. It was easy to see why small states don't seem to matter as much to spend time campaigning in, when they only have 3 votes to pick up, as opposed to the larger states where 10 or more might be at stake. Another key concept that was much more easily understood is the electoral college process, where the winner takes all the votes of the state. I know many adults who still do not understand this, and think that the popular vote is what elects a president!
The Bottom Line: In playing this game, I feel my children have received a greater understanding of the process of electing an American president. This game is an amazing way to learn about American politics in a fun setting.
Who is this game for? The recommended ages for this game are 11+. I think that is probably right on. While my 8 year old did participate in our family game night, I am not sure she totally grasped the concepts of the game, like my teens did. Adults would very much enjoy and appreciate this game as well, especially if they enjoy politics.
How much does it cost? The Presidential Game can be purchased here  for $35. plus shipping. When you purchase the game, a code is included to give you free access to the online WebMap Caluculator.
Some more extras: While instructions are included in the game, there are a few things that are not real clear, and the website has instructions to download as well as answers to frequently asked questions that are helpful when first learning how to play. There is also a Youtube summary of the game here:
﻿
I wholeheartedly recommend this game to any family who enjoys playing games together, but especially to those who enjoy politics and would like to compete to win the presidency! While the game can be played by only two players, it is much more fun to play as teams.
If you would like to read the opinions of other families from The Old Schoolhouse Review Crew who have also been trying out this game, please click the banner below.
﻿