My girls are crazy about horses, and I feel very strongly about having basic math facts memorized, so I was very happy to have the opportunity to review the Math Rider program through The Old Schoolhouse Review Crew.  I have found that the better a student has mastered basic math facts, the easier it is for them to move on to higher levels of math mastery, including algebra.

Math Rider is a computer based program targeted to children ages 6-12, to help them master their math facts. It has four levels: easy (covers the 0-5 families), medium (covers the 0-10 families), advanced (covers the 0-12 families), and master, which reviews all the families, and puts extra emphasis on any that have been troublesome to the student throughout the game.

This program was designed by a dad whose children were struggling with math because they did not have a good grasp on the fact families. He could not find a program that worked well to drill them on those facts, so he created his own!

Up to eight different users can use this program. (Although there is a license that can be purchased for classroom use that would allow for more students). Students sign in and create a "rider". Each rider has their own log in and password, so your student is only competing to improve their own score, not against other students, which can be frustrating and discouraging.

When riders log on, they are taken to a board that starts a story. It is a fantasy story, in a fantasy land. They are given a horse named "Shadow" to ride through the various quests, and they can choose from their home page to either practice or start a quest. Each quest has a different story, based on the level chosen. Each quest comes in sets of 30 questions, and progress is plotted on a map at the end of the quest. The program keeps tabs on time, percentage of mastery, and percentage of completion of the quest. It gives very instant feedback continually throughout the program. If the student gets a problem wrong, after several attempts, the play will momentarily stop to audibly repeat the question and answer, and then the student will see that problem come up repeatedly until it is mastered.

Students merely enter the numerical answers to the math questions (2+2=__). There is no extra hand-eye coordination needed to perform other tasks - all the focus is on the math. Each math problem is set as a "jump" for the horse to jump over. When the question is answered correctly, the horse continues to run and jump all the fences. When a question is answered wrong, the game slows down a bit, as the horse stops at the fence and the problem is repeated.

The story lines of the quests include retrieving medicine, gems, and freeing a princess. There is music playing in the background which my children found enjoyable. What they really loved though, was the sound effect of the horses' hooves galloping along the trail. The sound can be turned off if desired.

As the students successfully complete levels of play, they are rewarded with virtual prizes such as animated flowers, flags, or castles for their home screen. They keep those prizes on their home screen as they work their way through various quests to gain more prizes and solve more dilemmas that are brought up in the story line. 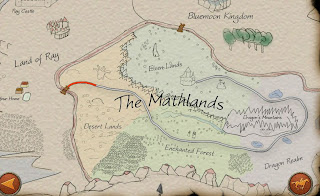 Map chart showing the student their progress through a particular quest. ﻿

Here is a sample video of the Math Rider program:

System requirements: This game can be played without an internet connection. After the initial purchase, it is downloaded to your computer and stored on the hard drive, taking up 80 MB of space. I put a shortcut right on the desktop so the kids could easily sign in to it. It can be played on either Mac or Windows. It uses Adobe Air to operate. See the website for additional system requirements.

Cost: The program can be purchased for $47. which gives you complete access, and lifetime free updates. It also has a 30 day satisfaction guarantee, and a free 7 day trial for you to try it out with your students to see how they like it.

How we used the program: We had three riders using the program during our review period. Kelly (a 2nd grader), Melissa (a 6th grader), and Mom! Kelly has learned all her addition and subtraction families, and has just started multiplication/division families in the past few months. Math Rider was a great way for her to practice her facts. She started on the easy level, and actually completed it and moved on to the medium level in both addition and subtraction! Her mastery level was improved by 23% while using the program. (Yes, it does keep track of such things! More on that in a moment...)

Melissa also started on easy level, but quickly progressed through to higher levels as well. She showed a 17% overall improvement on her mastery.  Both the girls use a math curriculum where fact review is built in on a daily basis, through repetition and speed drills, but this was a much more fun way to get that practice. The girls have enjoyed using the program. At first, they would do multiple quests a day and I had to set a time limit on how long they could play. As they advanced through the levels and the problems got harder and came faster, of course they weren't as enthusiastic to play for as long, but they still signed in on their own with no prompting, and would complete at least a part of a quest, on a near daily basis. 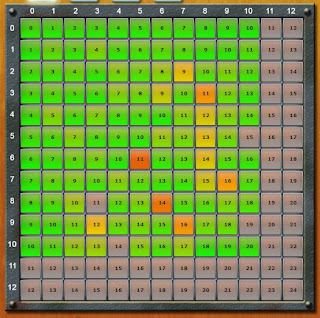 For myself, I really wanted to put the program through it's paces, and see what it could do, so I played it to gain mastery and see what kind of neat things would happen as I advanced through the levels. :-) I am happy to say that I achieved mastery of all 4 areas of operation, and the ending IS very cool! (But I won't spoil it - you will have to wait and see what happens on your own!)

Even though our review period is over, the girls continue to use it every school day, usually for about 10-15 minutes. It is enough time to complete several rides, and depending on how well they are doing, perhaps even complete an entire quest. I plan on having them continue, especially over the summer, to keep their skills sharp. I also hope to have Kelly much quicker with her multiplication facts before entering 3rd grade in the fall.

What I loved about this program:  That's easy - I LOVED the interaction and intelligence of the program. It self-adjusts to the speed and level that the student is playing at. If they are answering questions slower, their horse runs a bit slower, to keep pace. If they are answering quicker, it adjusts to that as well. And it keeps track of EVERYTHING - how long it took the student to answer a question, compared to how quickly they usually answer that same fact, as well as what facts they have mastered and which ones they need improvement with. If a certain fact is being answered at a slower pace than the others, that fact will be given to the student more frequently than ones they have no problems with. The program is designed to completely customize itself to that particular student based on their input. I was truly amazed by the way the program self-adjusted!

Also, for a fact junkie like me, I loved being able to see the progress that the girls were making in so many different ways! I was able to allow them to just play the program on their own, and not have to pay attention to every little detail to see what they were having trouble with. When they were finished, I would just look at their progress area and see for myself what their stats were. The program reports the students' stats in every conceivable way! I have included a few screen shots to show some of the reports. I was very impressed with the reports!

This shows the level of mastery with each math operation. 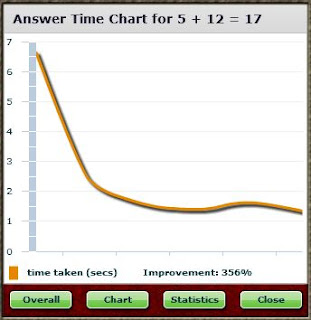 This graph shows the improvement in the time it took to answer this particular math problem. As you can see, the time was greatly improved with the repeated reviewing of this fact. (From nearly 7 seconds to just over 1 second) 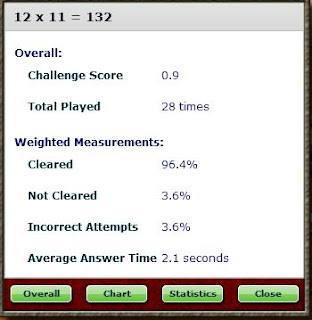 This chart gives a detailed summary of each particular fact, and it's history in the student's games. 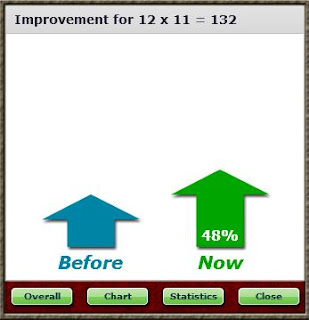 A visual view of the improvement for a given fact.
A few areas for improvement: Overall, I really liked this game. I think it is very unique, and is a tremendous way for children to quickly improve their math facts and get those facts solidified in their brains. There are a few things I would tweak if I could:
﻿
There is only one other thing about this program that I feel I must mention. While I cannot emphasize enough how effective this program is, there is one aspect of it that I didn't care for. I have a personal dislike for using 'magic' themed elements with my children. It may seem harmless, but I definitely will avoid a product that has thematic elements of wizards and magic, out of personal preference. This program had a light sprinkling of those themes. Out of obligation to those who know me well, read my blog and would consider purchasing this product on my recommendation, I really feel compelled to at least mention the presence of it so you can make a well-informed decision. If you feel strongly about such things, you should definitely at least trial the program free before purchasing to make sure you would be ok with how these story lines are presented, such as this example: 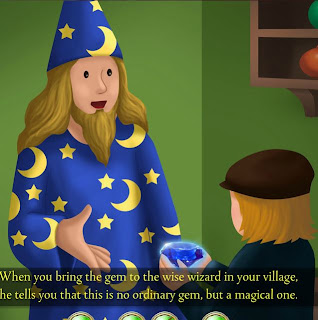 Would you like to read what other crew members thought of this program?  Click the banner below to read other reviews!