Inspiring Missions in the Heart of Children

Elementary children are sponges when it comes to soaking up stories of heroes. Why not let their heroes be those that love God and will inspire them to do great things for God? 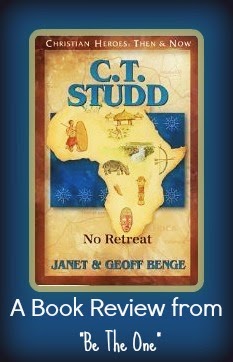 The following story is a biography of the life of one of my favorite missionaries in history: C.T. Studd. As you may recall, CT was a gifted cricket player in England in the late 19th century. He forsook all the glamour that this life offered him, instead surrendering to the call of God to serve on a several foreign fields, ultimately giving his life in the service of the King. His famous words, "No retreat, no regret" have inspired countless young people over the years.

This book is written to an elementary/middle school reading level, and does a fantastic job sharing the details of CT's life, as well as outlining his service on the mission fields of China, India, and Africa. What an exciting life he had!

It is written by Janet & Geoff Benge, and published by Youth With A Mission. It is currently available on Amazon {affiliate link included} as both paperback and Kindle version.


I would like to include a short book report written by my 4th grader after reading this book:

Janet and Geoff Benge wrote C.T. Studd: No Retreat. This Christian Biography has 188 pages. This book was published in 2005 by Youth With A Mission publishing.

Charles Thomas Studd (mostly known as C.T.) was born on December 2,1860. C.T. Attended Trinity College, Cambridge College, and Eton College. After he got saved he felt called to China. He went to China with seven other men from Cambridge. In China, C.T. met his wife, Priscilla. Priscilla was another missionary who had come to China. She had very bad health. They got married on April 7,1888. After awhile in China they came back home for a break. While they were home C.T. felt called to India, so he went. After awhile in India he came back home for another break. During that break he felt called to the heart of Africa, so he went. While he was in Africa C.T. started his own mission, called the ‘Heart of Africa Mission.’ C.T. spent 20 years in Africa. He died on July 16, 1931, in Ibambi, Africa.

My favorite part was when Alfred Buxton (C.T.’s helper and C.T. ate lunch with the cannibals. The cannibals gave them meat and C.T. said to Alfred, ’This meat tastes pretty good, I wonder what kind of meat it is?’ Alfred said, ‘You better not ask.’


Copyright 2012-2015 - "Be The One" - www.aclassofone.blogspot.com  All rights are reserved. No text, photos, or content may be reproduced without direct permission from the author.
Posted by Unknown at 10:37 AM