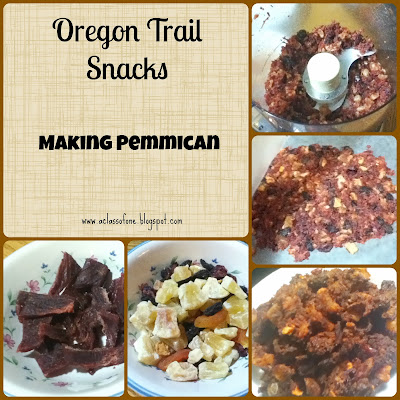 For our study of the Oregon Trail and Westward Expansion in America, we decided to make pemmican - a staple food of Native Americans and 19th century travelers.

We studied how the Native Americans made pemmican by combining sun-dried fruits and berries with dried meat from hunting.

Although we were able to enjoy the modern convenience of using a food processor, we learned a new appreciation for those who had to find their meat and fruit, dry it in the sun, then pound it by hand into a fine powdery mush that was able to be thoroughly mixed together. So much of 19th century life on the plains was all about survival. So much of the day was dedicated to the grueling task of just finding enough sustenance to fuel the bodies. We definitely have it very easy in our modern times, in comparison, and I hope that this lesson helped to instill that in my children.

Pemmican was a staple food because it was easily portable and lasted a long time without any kind of preservation. It was a very low maintenance food to transport, yet provided protein and energy (carbs). Could you imagine eating dried pemmican for weeks on end? Those who made it could spend a few days hunting, cutting up the meat and drying it, and gathering berries or other available fruits and drying those. This would produce a large amount of pemmican that could feed the travelers for weeks.

To make our modern version of pemmican, we first gathered a 3oz bag of beef jerky. 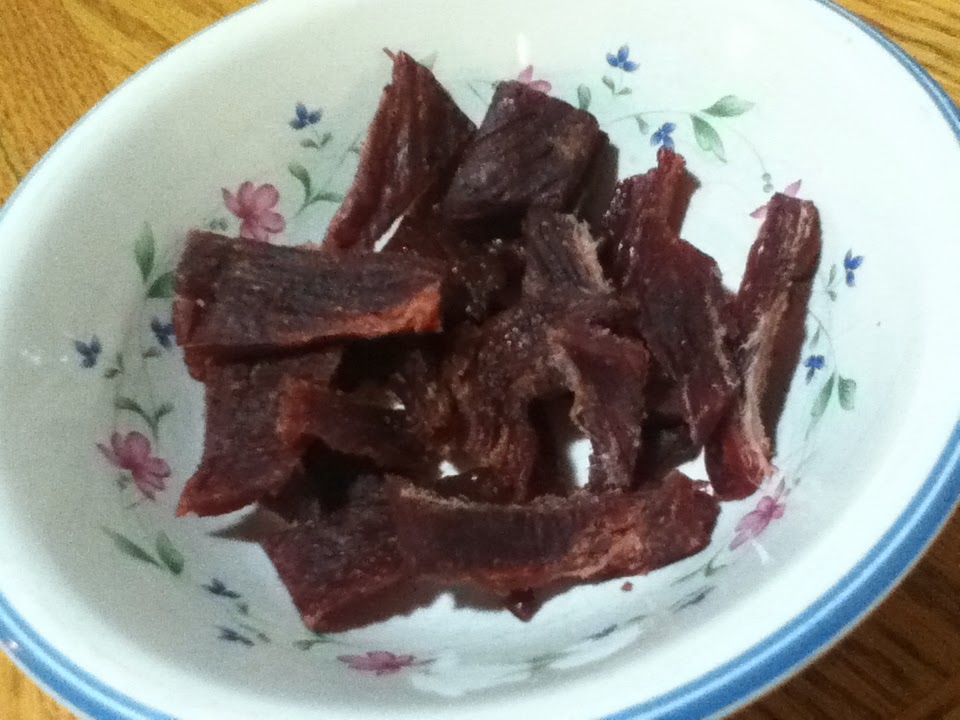 We also bought a small bag of mixed dried fruit. From our studies, we learned that most pemmican was made from dried apples or dried berries, but that travelers would also make it from any fruit that was available. Its purpose was to provide sweetness and energy to the pemmican. 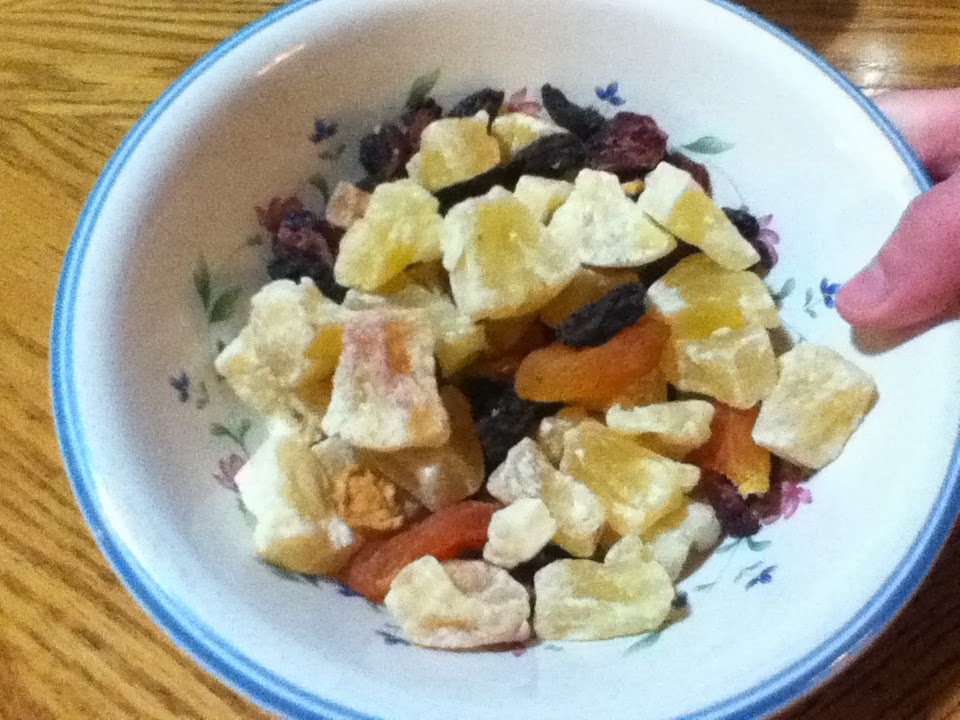 Although in the 19th century, those who made pemmican would grind or beat the dried meat into a fine powder, we placed it a few pieces at a time into the food processor to grind it. 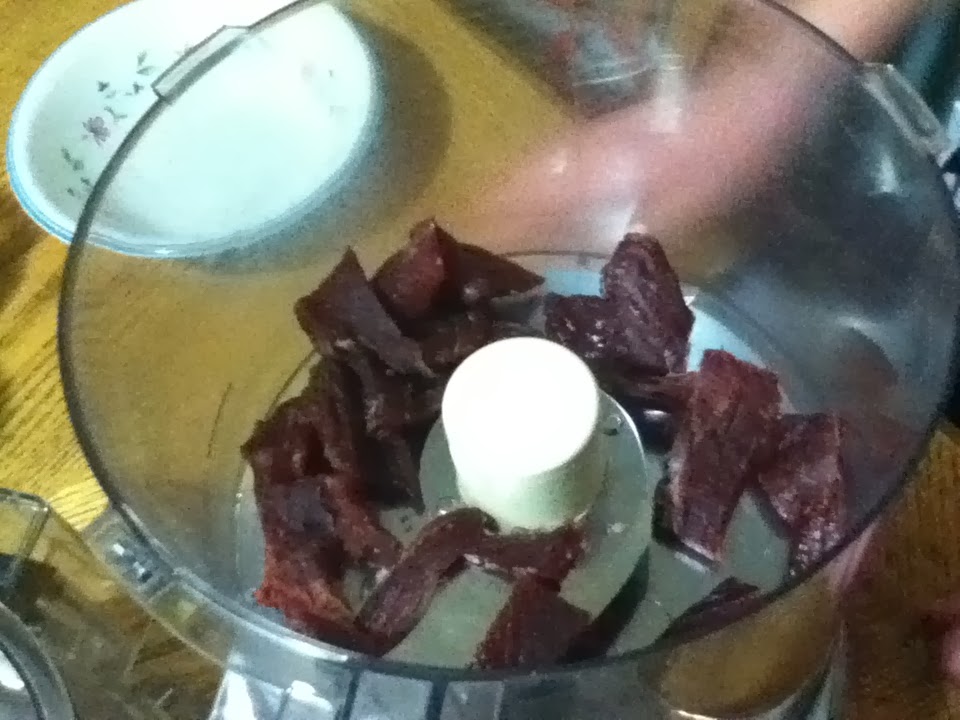 We then added the dried fruit, along with 2 teaspoons of water to moisten the mix. Indians were known to use bear grease in their pemmican, but we decided we would skip that part! 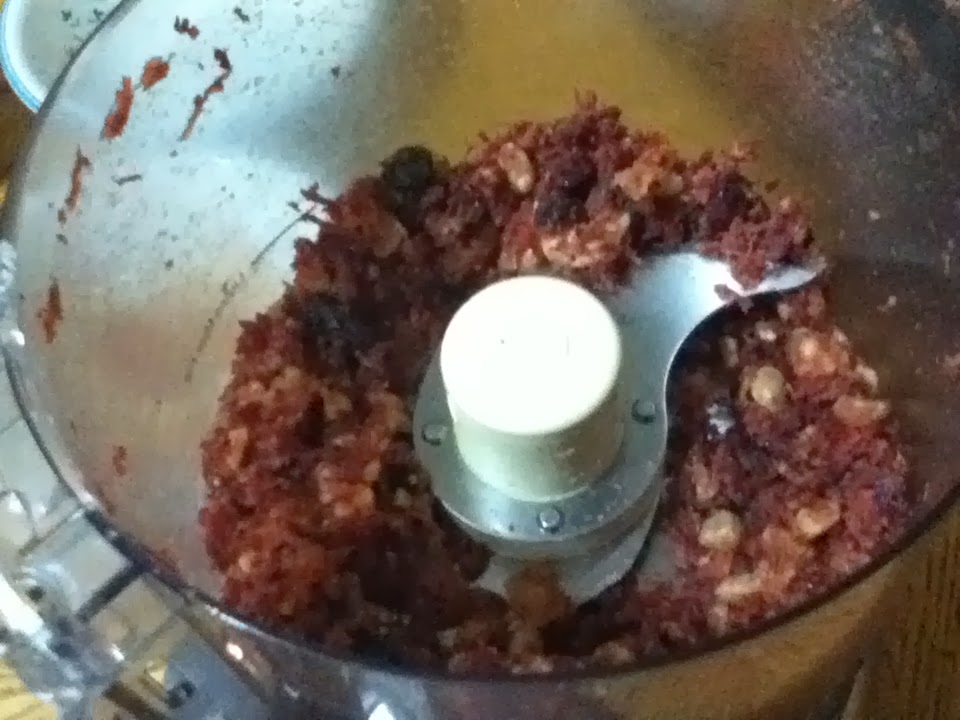 After making sure the meat and fruit was well pulverized and combined, we spread it out onto a wax paper lined cookie sheet. We left some bigger chunks, and did not completely grind it down. 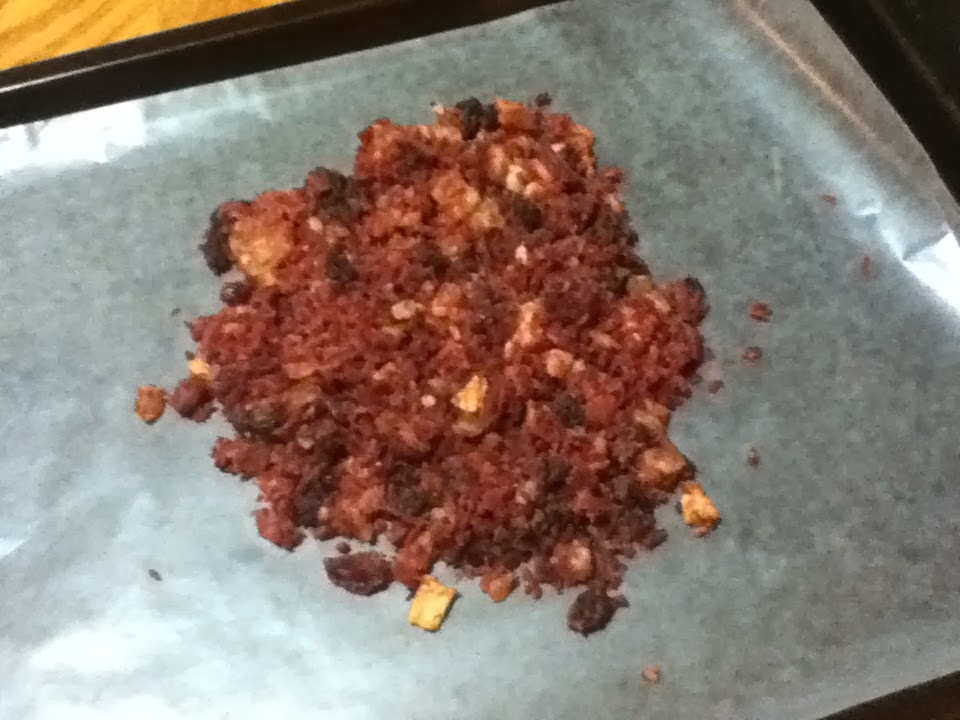 We then covered the pemmican mix with another sheet of wax paper. 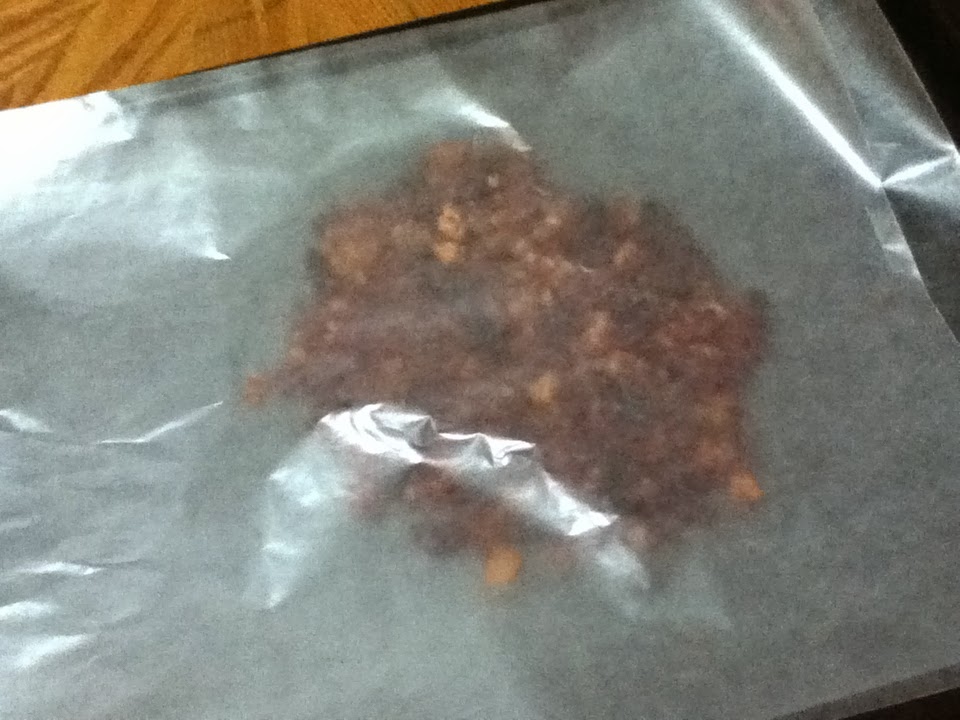 Using our hands, we pressed the ground meat and fruit together and shaped it into one large, flattened 'pancake' about half an inch thick. 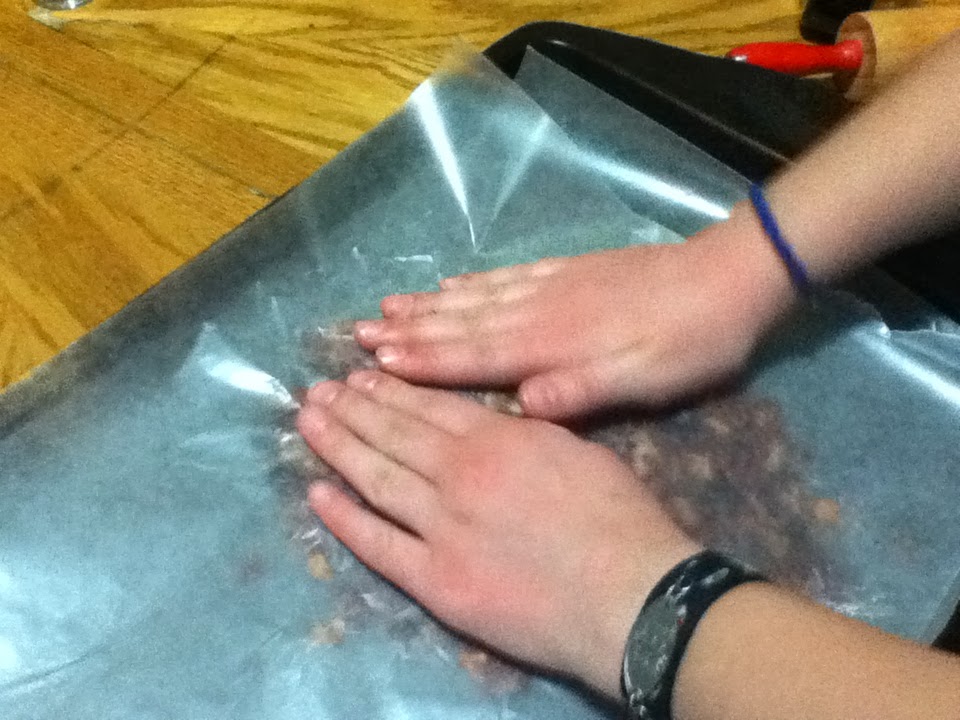 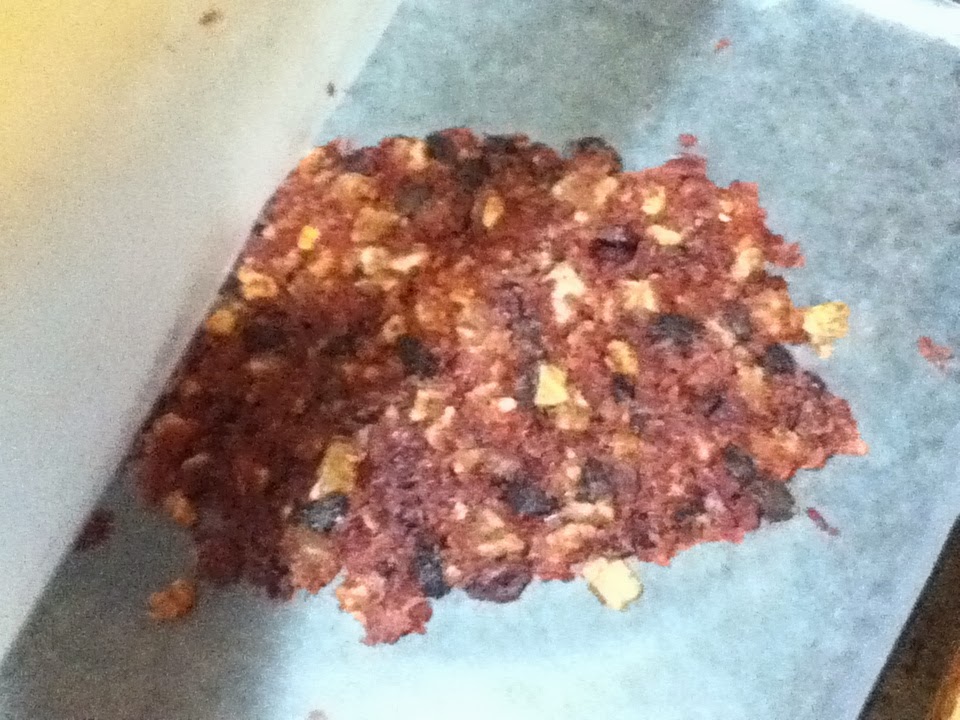 Since it is the middle of winter and we haven't seen the sun in weeks, we put our pemmican in the oven to dry out, rather than trying to find some sunshine to dry it. We set it in a 250 degree oven for about an hour. 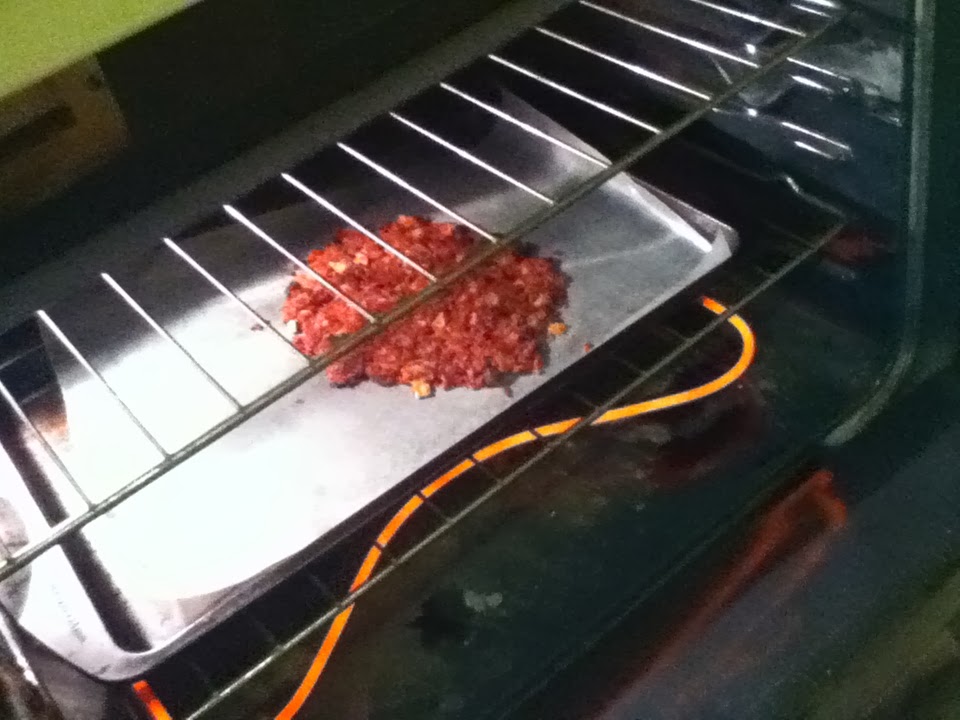 We watched it closely, and when the pemmican felt dry and looked browned, we took it out and let it completely cool. As it cooled, it hardened more, and after a few hours, we were able to break up the one giant piece into smaller, bite-sized pieces. It came out crunchy. (We had thought it would have more of a jerky texture). 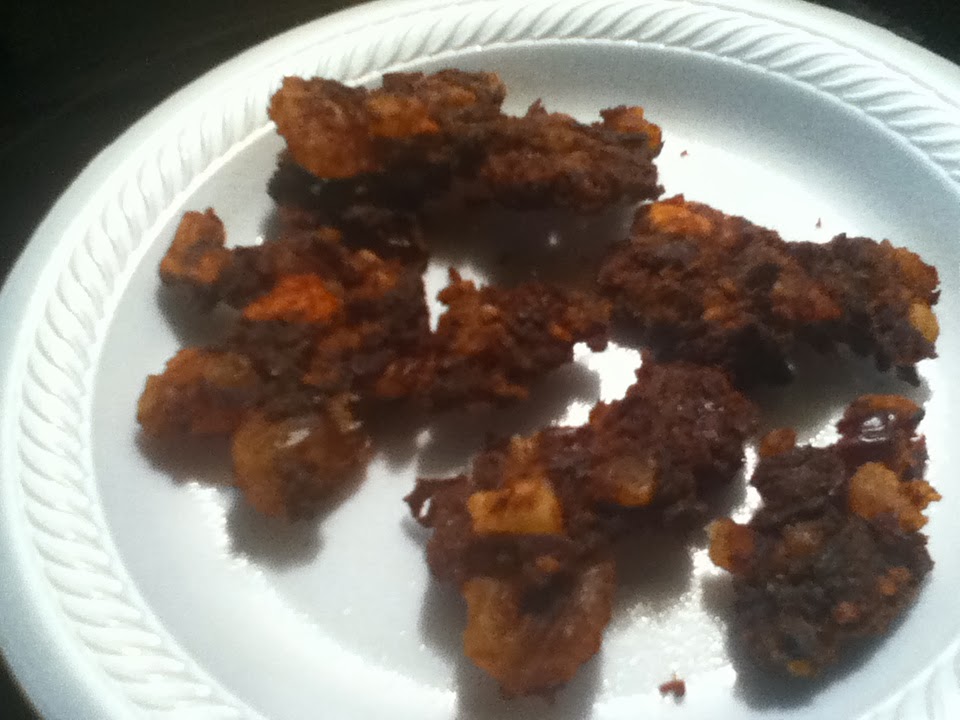 The pemmican tasted sweet because of the dried fruit, and we packed it in zipper sandwich bags for the girls to snack on.They enjoyed eating it, pretending that they were weary travelers on the Oregon Trail. 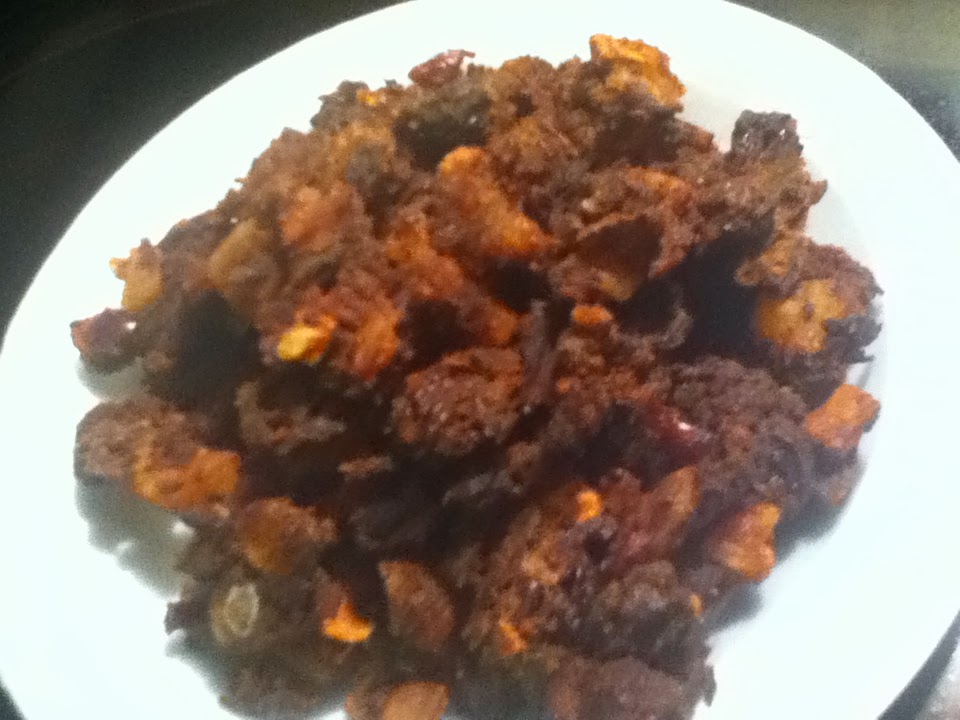 This was a really fun lesson, and the girls enjoyed the hands on aspect of learning what life was like for those who traveled in the 19th century.