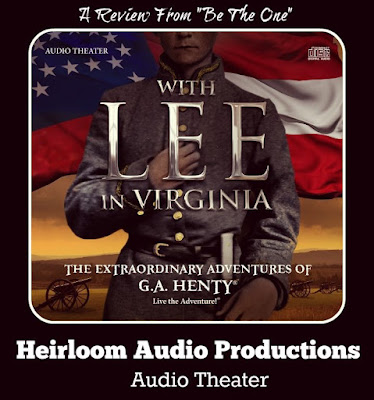 The Story Line: This historical fiction story follows the life of a young Southern man named Vincent Wingfield as he comes of age during the Civil War years and joins the Army of Northern Virginia. Because he is a talented horseman, he is put into the Cavalry and serves alongside famous generals such as Stonewall Jackson and Robert E. Lee. The story delicately explores the subject of slavery and also delves into the deeper battle issues of the war, such as state's rights, while educating the listener about the Civil War itself and the rich history of America during that time. Not only is the story packed with action, but there is a strong sense of Biblical teachings and character training woven throughout the adventure. Devotion to God is emphasized and demonstrated by the lives of the generals. Both Lee and Jackson were very Godly men, whose character and dedication are to be greatly admired and from whose lives there is much to be learned.

What Is Included: The package includes two audio CD's with about 2 1/2 hours of listening time. There is also a website where the listener can download a free study guide to use alongside this CD set, making this a great Civil War unit study or addition to an American History curriculum.

Age Recommendation: Heirloom Audio recommends this for ages 6 to adult. There are some vivid sound effects of war, fighting, and slave punishment, so parents should use discretion for younger listeners and make sure it is appropriate for them.

All Star Cast: There are some pretty popular voices in this production, including Sean Astin, Kirk Cameron and his son, Brian Blessed, Chris Anthony, Kelsey Lansdowne, and Jim Weiss.

About the Study Guide: The free 52 page study guide can be downloaded and printed. There is a short lesson for each track of the CD, including three parts:
The study guide also includes several map studies, helping the student track the travels of the main character, as well as seeing the big picture of the layout of the US during this era. 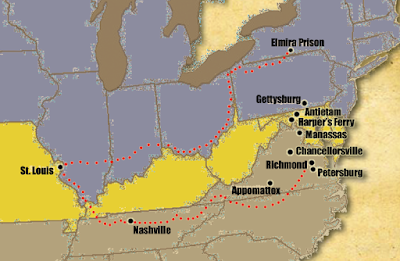 At the end of the study guide are several Bible studies that emphasize character training and Biblical lessons that can be drawn out of this story, including Duty, Loving Your Enemy, and Slavery in the Bible. I greatly appreciate the strong Biblical teachings and explanations that accompany this CD, and the explanation of slavery in the Bible in comparison to modern times is just fantastic and very clear. Throughout the study guide are historical photos and drawings that really bring the lessons to life.

How we used this: Since we have already reviewed "Under Drake's Flag" and "In Freedom's Cause" from Heirloom Audio Productions, my kids knew exactly what to expect and were eagerly anticipating the release of this newest audio adventure. In fact, they were stalking the website and Facebook page to see when it was complete! American History and the Civil War is one of our favorite subjects to study so they couldn't wait to hear this story.

When the package came, my 17 year old snagged it first and out it went with her to her car. We didn't even get to see it until the next day when she brought it in after listening to the entire story. Each of the kids subsequently grabbed it, one after the other, and listened to the story in its entirety. It was a few days before I was able to have a turn, and had to listen to all their feedback about how wonderful the story was before I even got a chance to hear it for myself! I had to agree - the story is compelling and attention grabbing right from the start, and I couldn't stop until I listened to the whole thing! We have since listened to it together as a family as well. The recording is so well done, and the cast is so enthusiastic that you can't help but be completely invested in the story from beginning to end.

Listening to "With Lee In Virginia" has really opened up some good conversations in our family about the Civil War, states' rights, slavery, and how deep the divide was between the north and the south. It was fascinating to learn of the devoted Christianity of some of the Southern generals, and discuss how their Christianity helped them through such a difficult time, even in defeat. The character training lessons woven throughout the story are priceless, and so relevant.

Though we have not made as much use of the study guide as I would have liked over this summer, it will make a tremendous unit study for us to really dig into the next time we are studying the Civil War.

Final Word: Our family absolutely loved "With Lee in Virginia"! I am planning on adding it to my Christmas & birthday shopping lists, as there are several people that I know would love it as much as we do. I wholeheartedly recommend it for educational entertainment and the kids are already investigating when the next adventure from Heirloom Audio Productions will be ready!

To read what other Crew members have to say, click the banner below: