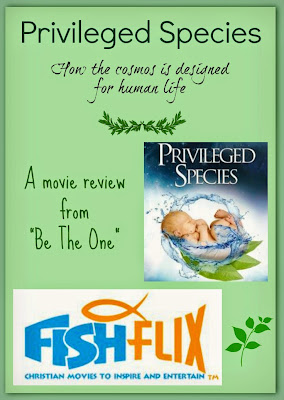 We are always on the lookout for good sources of Christian movies for education and entertainment, and recently we learned of a company that seeks to provide both! In fact, we even had the opportunity to review the DVD Privileged Species from FishFlix.com.

About the company: FishFlix.com was started about a decade ago by a Turkish Christian named Dr. Enis Sakirgil. His purpose was to help produce and distribute a movie about the Apostle Paul and the rich Christian history in the country of Turkey. Once he immigrated to the United States, his business expanded to selling other Christian movies, and now the Minnesota based business exists to "glorify God through amazing customer service and quality Christian content." They are strictly an online store, with a selection of literally hundreds of DVD's spanning all categories of family-friendly, Christian viewing, including children's stories, Apologetics, Educational, Science, Historical, Romance, Drama, Biblical stories, and action.

About Privileged Species: This DVD, lasting 33 minutes, offers a simple exploration into the scientific study of our universe, and how humans are especially privileged to inhabit a home that seems to be designed implicitly for them. While the movie is very scientific, it is also simple enough that even children will find it understandable.

Who watched it: We watched this movie as a family. Of course, those who have studied more science (my two "college kids") were able to grasp all the scientific facts in a more meaningful way, but even the two younger ones, ages 10 and 13, had no problem understanding most of what was shown.

My summary of the movie: After opening with a video clip of a speech by Bill Nye, who was expounding on the fact that he is "only a speck", the stage was set for a thoughtful discussion on not only the purpose for humans to be here, but how the cosmos came to exist in the first place. Throughout history, it has been understood that man always had a special status. In the mid-1800's, when Darwin's evolutionary theories were being explored, this special status began to come into question.

This movie objectively and scientifically investigates many aspects of Chemistry and Physics, including four powerful physical forces of life, with special focus on the attributes of carbon, silicone, water, oxygen, and the human brain. There are several interviews with world renowned scientists, who share their impressions about the forces of nature and their relationship to human life on this planet. It is obvious that the evidence in nature itself promotes the idea of intelligent design, which has made a powerful impression on these scientists despite their own personal religious background or beliefs.

Impressions this movie made on me: Man is definitely not an accident or creature that got here by chance. If only one element were to be slightly changed, not only human life, but all life on this earth would cease to exist. The biochemistry of life was pre-ordained in the atom building process, allowing nature to replicate itself. Oxygen is the signature of this complex life.

Is this movie religious?  I actually found this movie to be non-religious. I thought the facts were presented in an objective and factual manner to make the viewer think. There was not an overtly Christian message. The message I walked away with was that there is no way all of this could have "just happened" and that there had to be an Intelligent Designer, which would make this movie a great view for scientists or people who hold to an evolutionary worldview but are open to challenging their thinking.

Conversation points: If you view this movie with your children, you should note that some of the scientists that are quoted refer to humans as "animals" that have unique and distinct characteristics. There are also a few sparse references to a "millions of years ago" time frame when discussing the origin of the universe. Personally, I find this to be mainstream conversation that just needs clarification when viewing with younger family members, but parents should take note of it so that they can clarify their own worldview with their children.

In a nutshell: Privileged Species breaks down the elements of the universe into understandable bites, expounding on the basis for intelligent design. I highly recommend it!

Pricing: The DVD is currently selling for $9.99 on the FishFlix website. Most of their DVD's are very reasonably priced, in order to make them accessible to Christian families. They also offer free shipping on all orders over $35.

You can watch a trailer of the movie Privileged Species:

Members of The Old Schoolhouse Review Crew reviewed a total of six different movies from FishFlix.com. To read the other reviews, click the banner below: